Interview with Jo Frederiks, an artist creating statements visually through the power of art

About art and veganism

VeganOrigo: Why are you vegan?

Jo Frederiks: I'm vegan because I refuse to contribute to the exploitation, slavery and needless killing of sentient beings. It's as simple as that.

V: When did you go vegan?

J: I've been vegan for 24 years. I became a vegetarian one year prior, immediately after reading an article on the immorality of eating animals. It never occurred to me to question my actions until that moment. 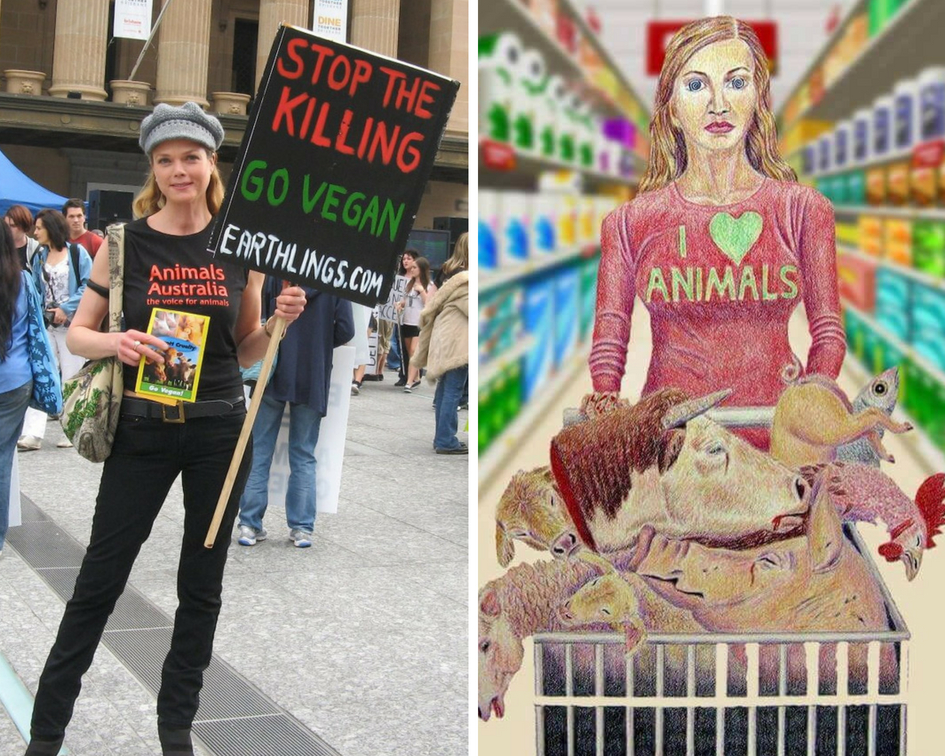 V: What was the motivation?

J: 24 years ago I attended an information night hosted by Animal Liberation Victoria. One of the guest speakers was Professor Peter Singer, author of the watershed classic, Animal Liberation. That event changed my life. I became vegan overnight. For the first time, I heard of the extreme cruelty hidden behind egg and dairy. I purchased Singer's book on the spot and found it compelling; it informed me of the countless ways we use and abuse animals for food, clothing, entertainment and vivisection. Once you know the truth, there's no going back.

V: What has changed in your life since then?

J: Well, I can honestly say I've not been sick in the last 24 years. My overall health improved dramatically. Before being vegan I had battled with anorexia nervosa and eating disorders for much of my life, and to the extent were it very nearly killed me. Since being vegan, I have never once needed to go on a 'diet' or worry about my weight. Becoming vegan shifted my focus from being very self-absorbed about my body and how much I could or couldn't eat, to an entirely different viewpoint –  animal liberation - it was no longer all about me. I might also add, I had suffered from severe acne for much of my life. Little did I know, the acne was caused by consuming dairy.  Removing animal secretions from my diet completely cleared up my skin. These were unexpected outcomes from living vegan. Although I must stress, veganism is not a diet - it is a philosophy of nonviolence. 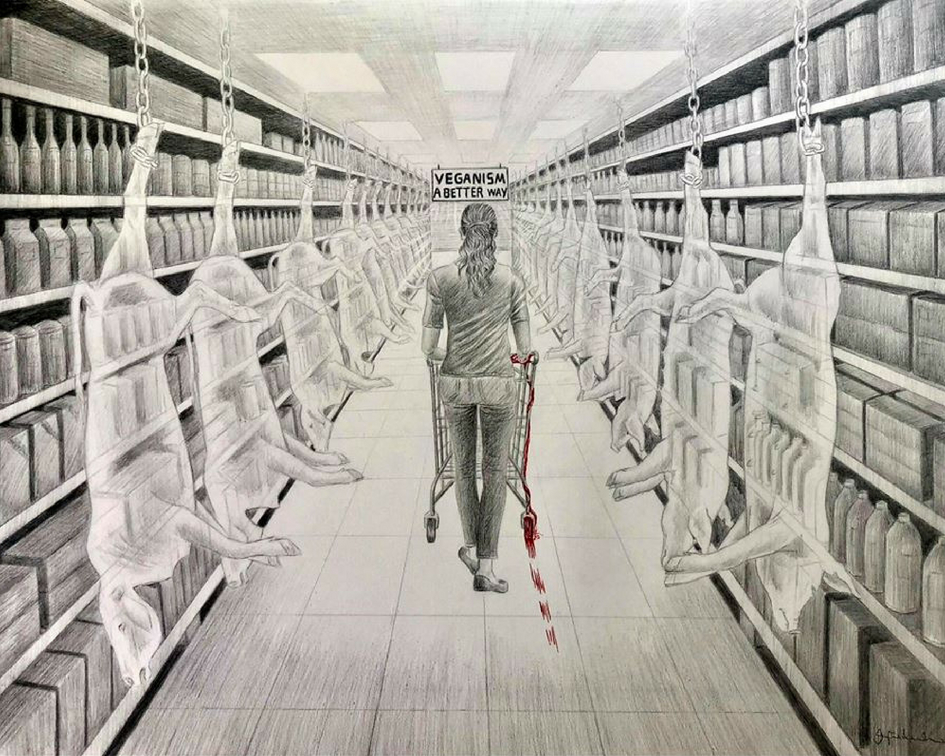 V: What being vegan means to you?

J: To be vegan is to reject violence and to demand justice for ALL sentient beings.  To be vegan means we no longer have victims.

V: When did you start drawing?

J: I've been drawing ever since I was a young child. Back then I was obsessed with drawing horses and was inspired by Anne Sewell's great classic, Black Beauty. 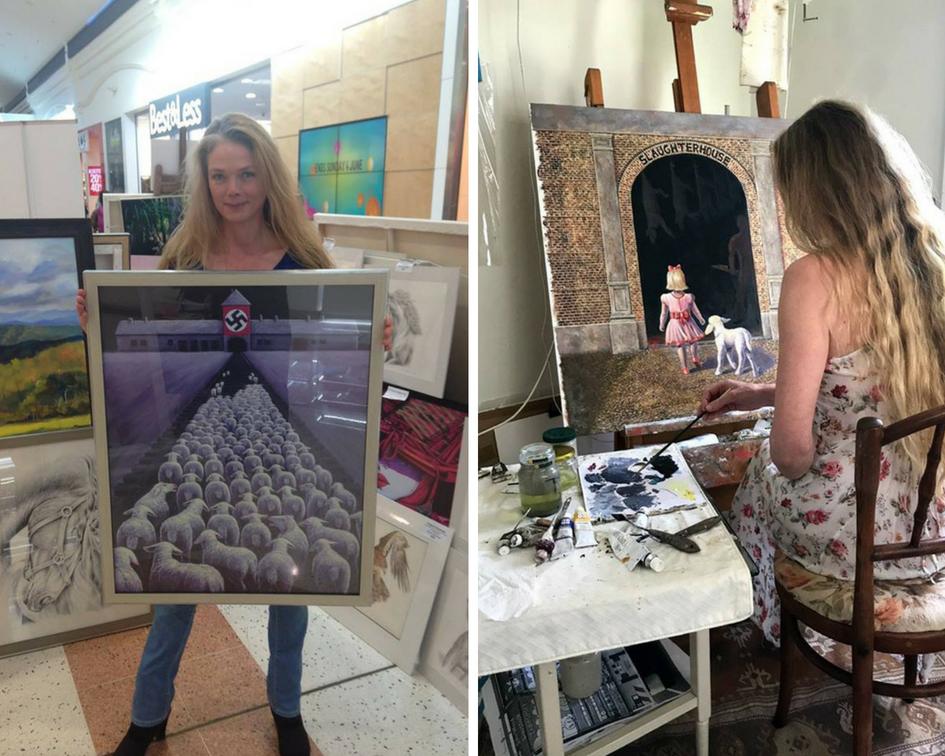 V: When did you connect this 2 passion in your life (art and veganism)?

J: Credit must go to my dear partner for helping me connect the two. About six years ago we had a  conversation discussing how frustrated I felt as a vegan living in a nonvegan world. As a vegan, I am aware of the injustice we inflict on nonhuman animals, and desperately want nonvegans to open their eye and be aware of it too. However, to my dismay I was  - and still am -  faced with apathy, indifference and denial regarding the plight of our fellow beings. So my partner suggested I redirect my energy by creating images of how I see the world. Well, I see an animal holocaust on a scale so massive we cannot even begin to comprehend, this lead me to create paintings depicting the animal holocaust.  My work developed and expanded from there, and resulted in the internationally acclaimed Animal Holocaust art exhibition, which was opened by Philip Wollen, OAM in Australia, in 2014. There are now approximately 50 paintings, and 200 or so works on paper in this vast body of work.  The images outrage some people, but I find they resonate with far, far more than those who object to it. Art is meant to make a statement - this is the real purpose of art. If it's causing controversy, it's causing conversation, and that means it's doing its job. I regularly receive mail from people saying they have embraced veganism after viewing my artworks.  Also, what's encouraging is I often get letters from school kids and university students asking me questions because they are doing a school project or essay based on my work. 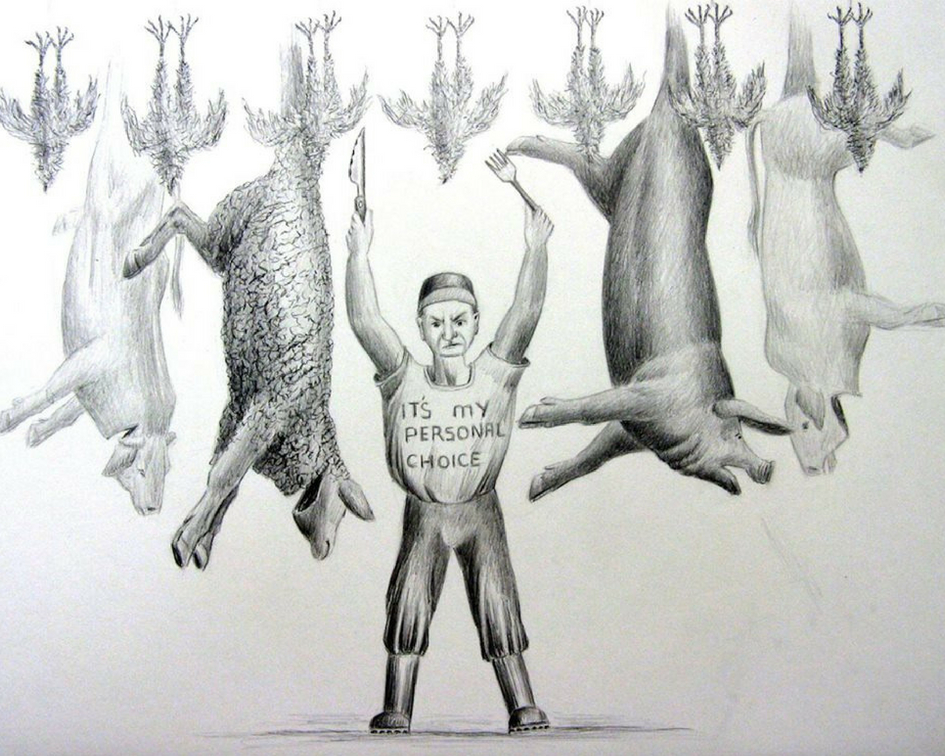 V: What is your message?

J: Animals are not here for our use; they are not commodities. We MUST stop consuming, enslaving, exploiting and killing them. Not just for the animals sake, but for the health and sustainability of our planet depends on it.  I hope I convey this through my artworks. 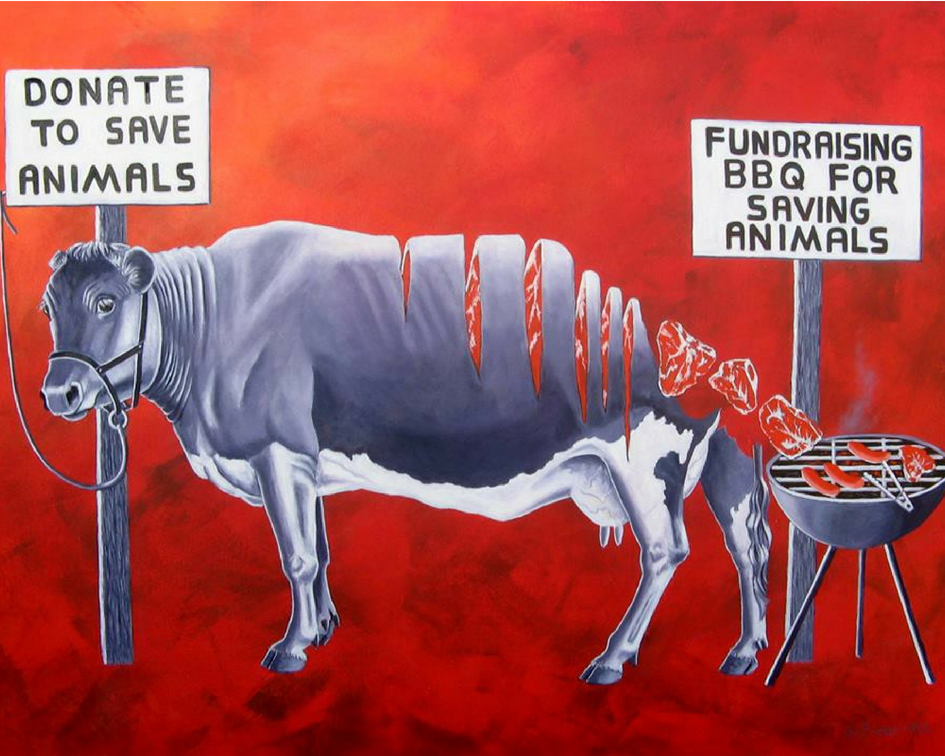 V: What technique do you use?

J: At the moment mostly graphite works on paper.

V: Where is your inspiration coming from?

J: My art can deeply move people and invite them to question their actions and ethical stance. I suspect some vegans may find the images strangely comforting. I find that inspiring. 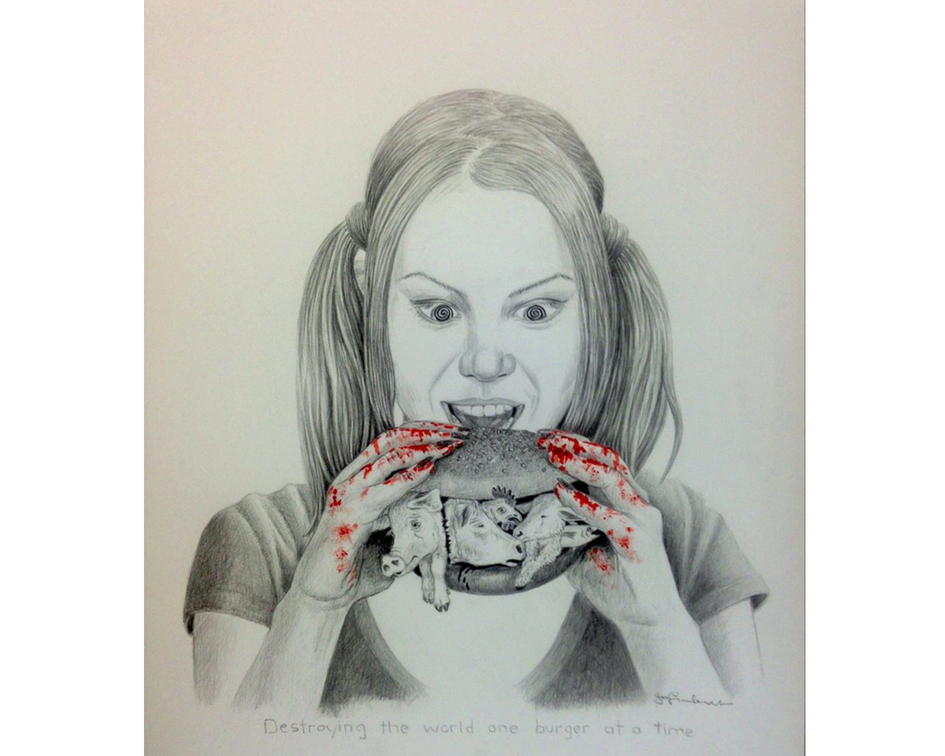 V: Do you use vegan equipment? 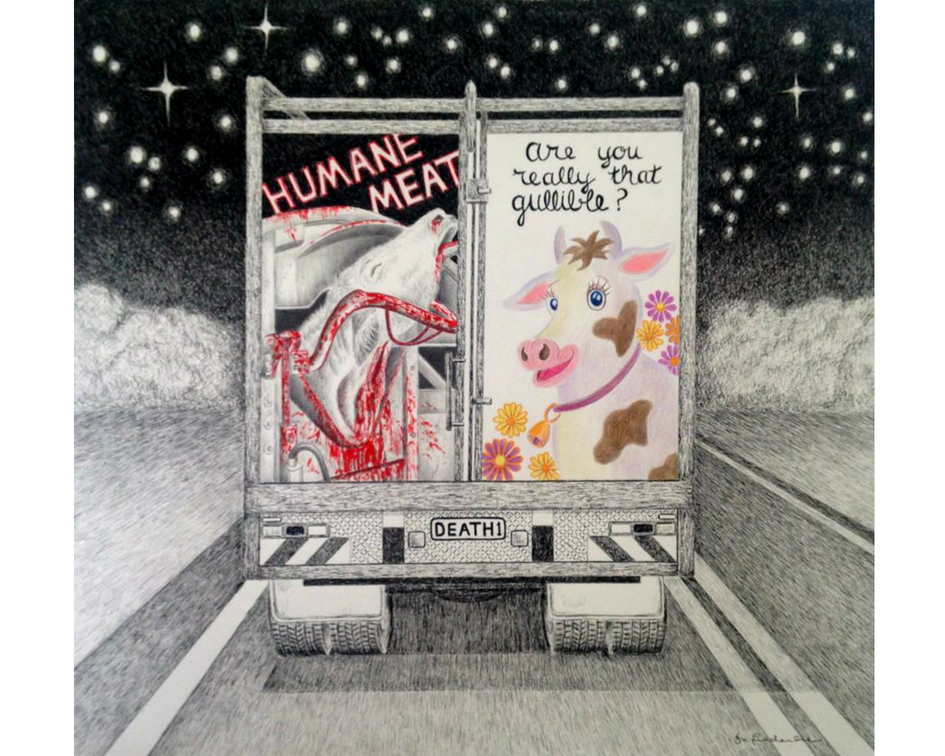 V: How do you see the vegan movement?

J: Growing rapidly largely thanks to the power of social media, but undoubtedly not fast enough.  Of great concern though is the rise of certain egos and infighting within the movement. Many vegans just seem to criticise how other vegans advocate and that helps no one, certainly not the movement and least of all the animals.

V: Where do you see yourself in the puzzle of vegan activism?

J: I am an artist creating statements visually through the power of art. It has proven to be an effective way to engage and inspire people. As the saying goes, a picture is worth a thousand words. 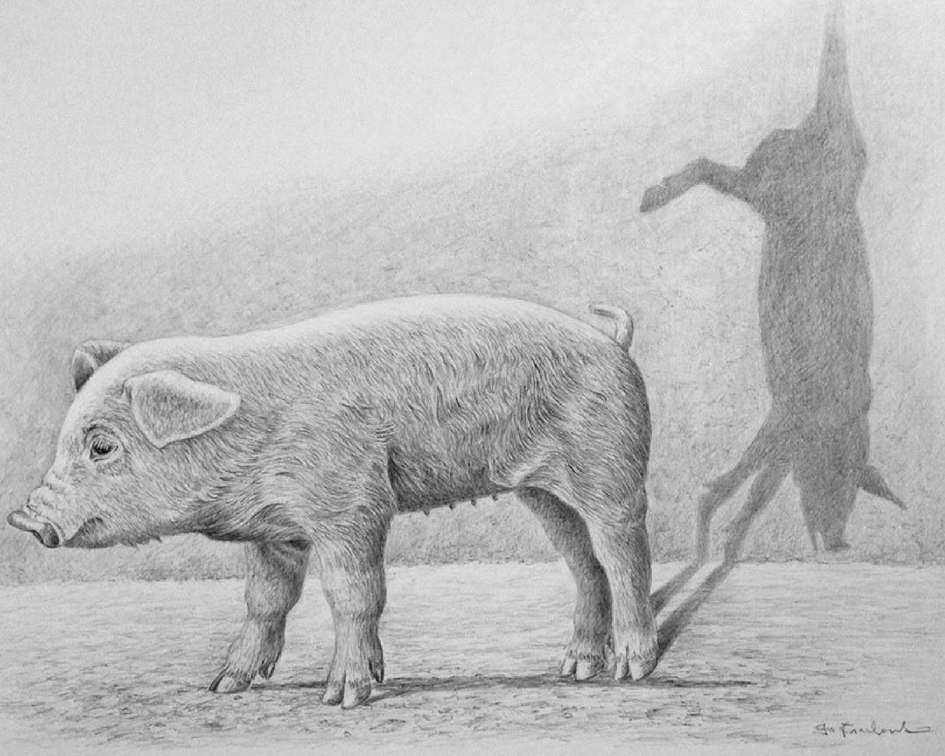 V: Where can your art be seen?

J: On my website. The exhibition needs to travel. I hope to take it to Sydney or Melbourne in the near future. The costing is a considerable hurdle I have yet to overcome.

V: Do you have T-shirts with your art on them?

J: Yes, you can find some here. 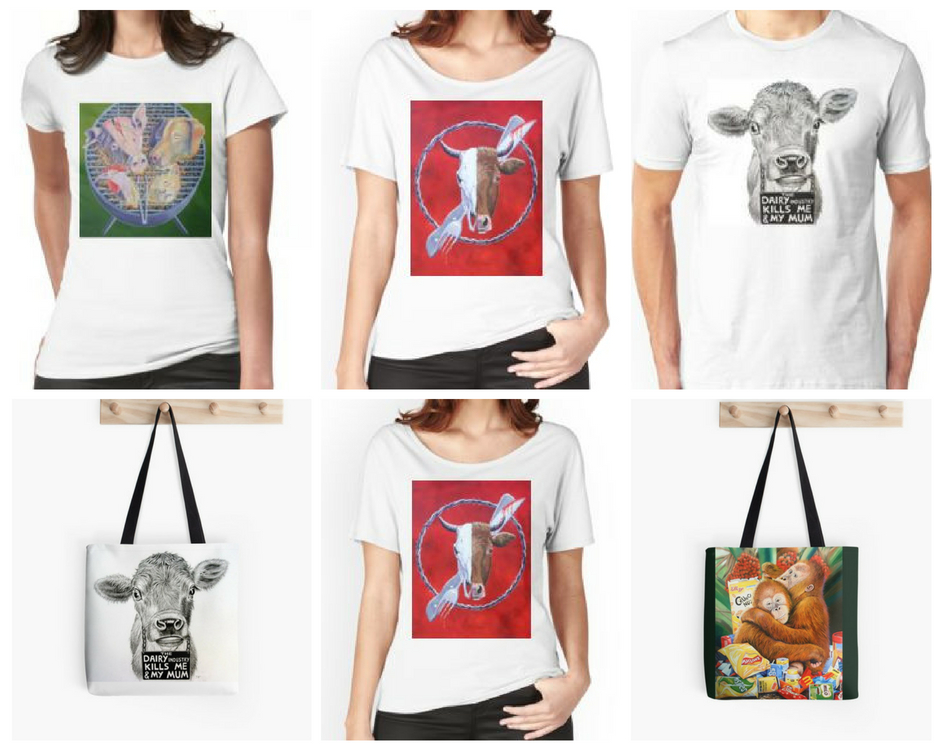 You can find further interviews with vegan influencers here.

Ullenka: about how to cure eczema with raw vegan diet

Seb Alex: about veganism, Anonymous for the Voiceless and other way of supporting animal rights.

Marlena Rozenberg: About sailing, veganism and following your dreams

Dr Ruth Heidrich: A 36-year vegan survivor of Stage 4 breast cancer, and the first vegan to do the Ironman Triathlon. At the age of 83 she is still in perfect health and living an active life. She was also featured in the Forks over knives documentary.

With Richard Watts, about Vegan SideKick, motivation, trolls and excuses.

With Mariia Goldscmidt from Tofu family, about being a fit mum and raising a vegan child.

We have created the biggest list of vegan related books if you need more information about veganism, looking for mouth-watering recipes, tips for raising vegan kids or children books for the lil ones.

If you are new to veganism, you might find this article useful: Vegan Starter Kit.