About veganism, Anonymous for the Voiceless and other way of supporting animal rights.

VeganOrigo: Why are you vegan? Since when and what was the motivation?

Seb Alex: I have been vegan for 4,5 years. I used to be vegetarian for 8 years before, but I didn’t know anything about veganism that time. I thought people do this for their health, because they have specific health problems. I always thought I need protein and calcium from milk, so I never considered to do that extreme vegan thing. After 8 years of vegetarianism I was wondering why, we humans still drink breast milk, so I googled „why don’t vegans drink cow milk?” and I found out the truth behind all the other animal products, and I found out about ethical veganism, so I became vegan. It was for the animals. 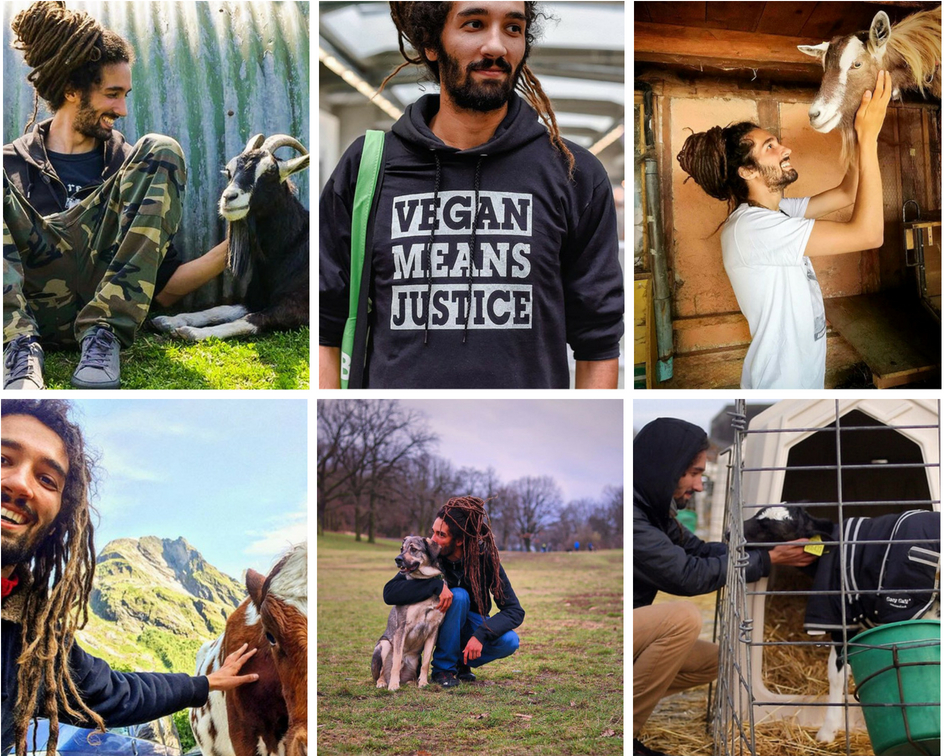 V: What changed in your life?

SA: I never thought about the difference between vegetarianism and the animals, but since I went vegan a lot of things changed. I feel much lighter, I sleep less, but better. I don’t feel heavy after lunch or dinner. Mentally it is really nice, because when I sit down to eat my lunch or breakfast and I finish it knowing, I didn’t kill anyone. I enjoy it so much.

V: What type of activism do you do?

SA: I do mainly street activism and slaughterhouse vigils with Anonymous for the Voiceless (AV) and The Save Movement (TSM), Earthling Experience, whatever I can find, I join. Sometimes we just have a table and chat with people. I am a co-organizer of AV of Barcelona and Barcelona Animal Save. Sometimes attend Direct Action Everywhere. Whenever I have the opportunity I just talk with people, without the limit of the organized actions. 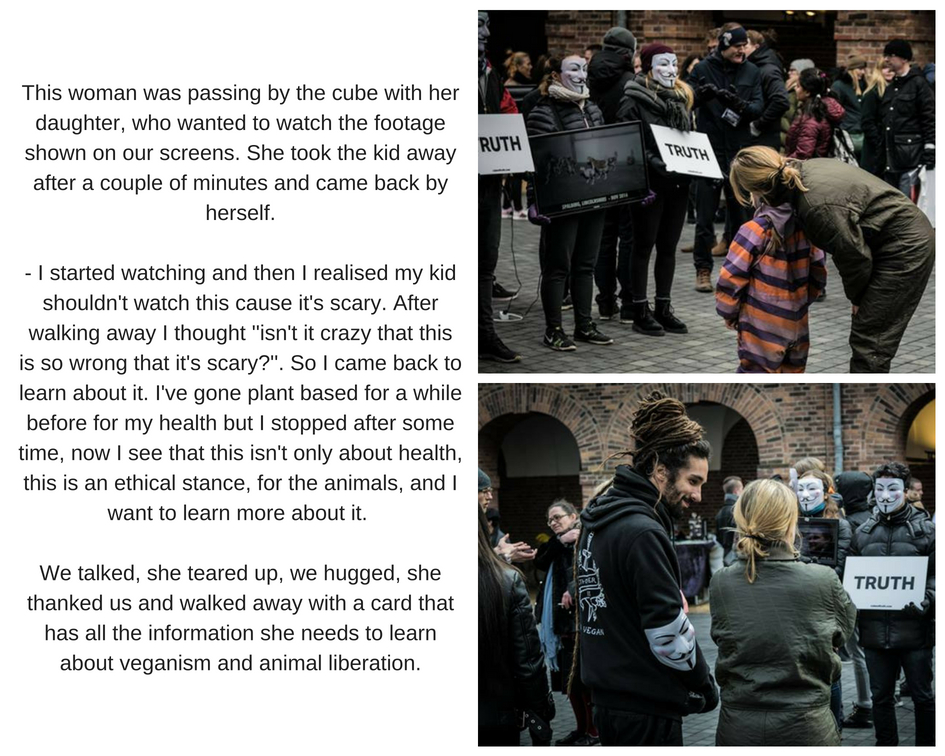 V: If you go to another country / city how do you find the groups you would like to join?

SA: I really like the fact that AV and TSM grew worldwide, with a network in so many cities, that I can join them in any city. It is so easy. On other hand, I am opened for any other activism. Once I had the opportunity to join in a “tableing” event, I have never done that before. We offered people food and then we talked with them. It was a really interesting experience.

V: What activism gave to you?

SA: For me outreaches, like cubes of Anonymous for the Voiceless helped me a lot; with practice, I got better and better. Also just watching other people doing any kind of activism, and learning anything from them. 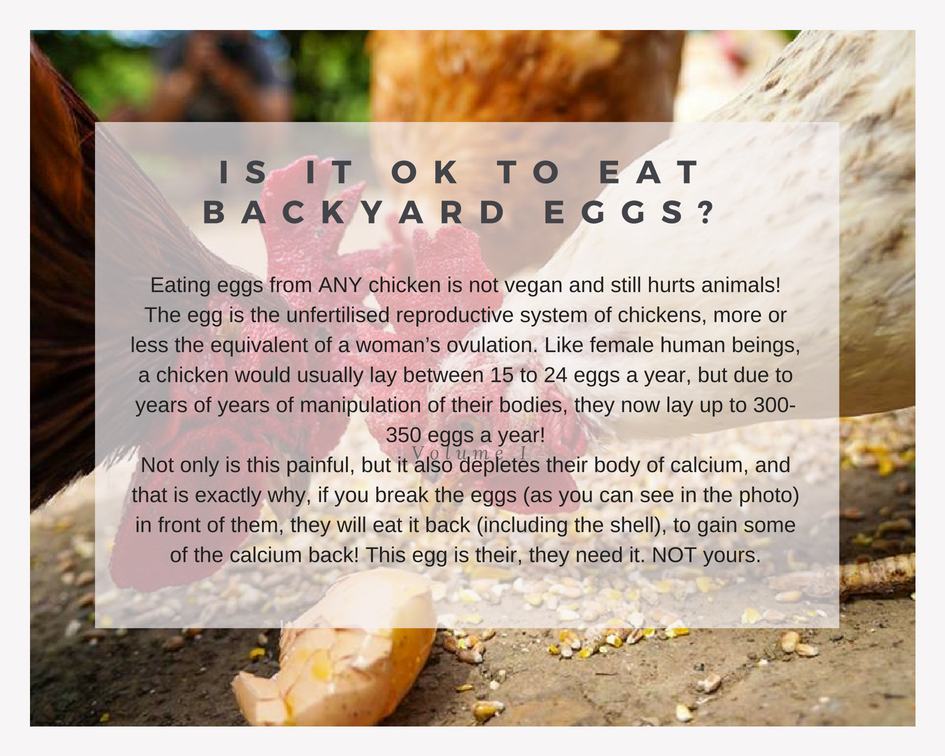 V: If somebody hasn’t heard about Anonymous for the Voiceless, could you explain what does it mean? What do you do?

SA: It’s is an activism movement, started around 2 years ago in Australia. It is about making a cube, a square, wear masks and holding laptops, showing images of industries with animal exploitation. It is presented in a very professional way. Everyone is wearing black, or the darkest clothes they have. When people come and watch it for a while, we approach them and start talking to them. We ask them what they know about it, can they explain what is going on there. Lots of people become vegan on the spot, it is a very effective way of activism.

V: What are the feedbacks?

SA: Normally those who stay long enough to talk to them, give very positive feedbacks. Even a beef farmer was engaged once in Ireland, and he was touched, as he doesn’t like what he does to the animals. Very very rarely we get negative feedbacks, as anybody who doesn’t want to be involved just walks away from us. Those who stay are usually very opened.

V: How do you help them if they need further information?

SA: When we finished talking to them, we have a small card with all the information they need to know: documentaries, online help, books, websites. We tell them if they are really interested in animal rights than we suggest them some documentaries, if they want to know more about the environment then we suggest something for them also.

V: What would you suggest to those, who would love to join, but hesitating for any reason?

SA: I always say, you don’t have to join the first time you go. You can easily go to the event, stand at the background and watch everything, and see how you feel about it. You can also talk with the activists, and see how friendly they are. If you feel comfortable than next time you can join also. On other hand I don’t think anyone should pressure themselves doing it, everyone should find the way of activism suits them the best.

V: How do you see the vegan movement generally?

SA: I think it is great as it is growing very fast. There are about 700 AV groups and 400 Save groups around the world. Personally I think it doesn’t grow fast enough, because we are facing a very horrible ecological collapse, and we should stop animal exploitation also. So for these reasons we have to grow faster.

V: A few weeks ago in Berlin there was a huge AV cube for 24 hours non-stop. You were there. How did it feel like?

SA: It was really great, as for 24 hours 1000 activists were there, from hundred countries around the world. We had to make many cubes as we were too many for one big cube, but it was really great. So many people were there, it was very motivating to meet all those people and do it together. Some were standing there in the rain, even at 4 in the morning. They could have step out, but they decided to stay. It was very inspiring. 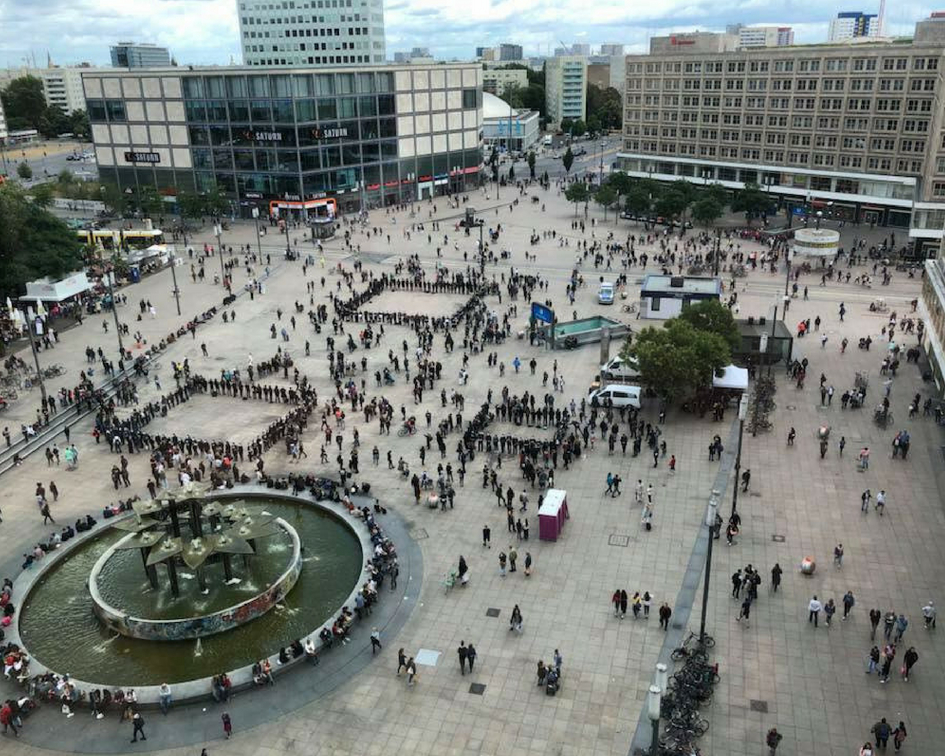 V: Do you have any books or documentaries you would suggest for those who are interested?

SA: For documentaries I would suggest:

For books I recommend: 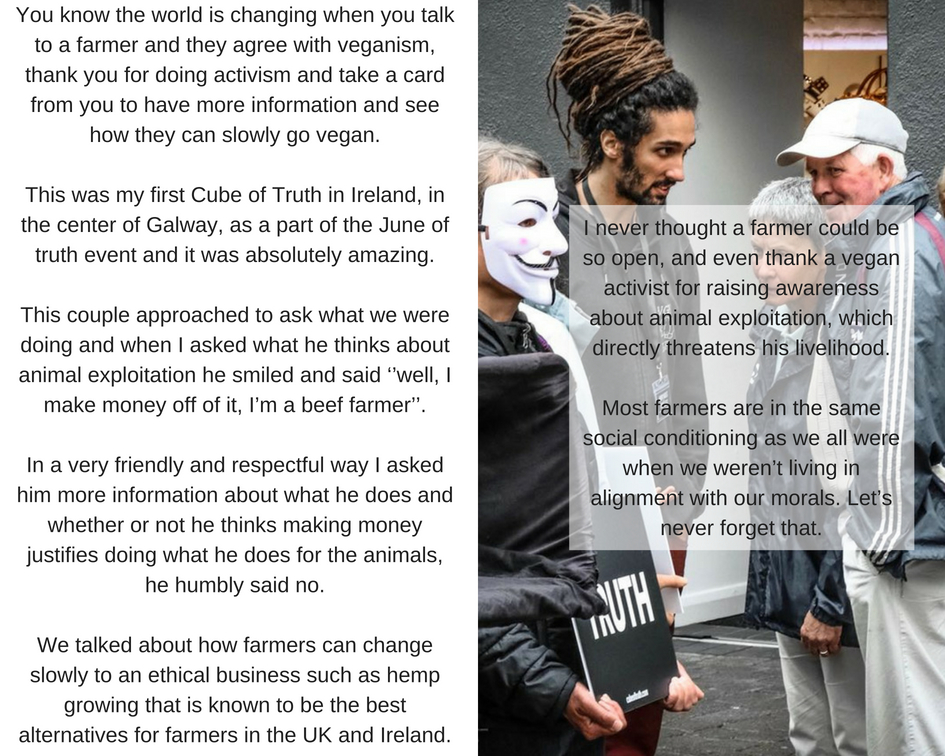 V: What do you think is the best method for changing the conditioning in people?

Then, I just say 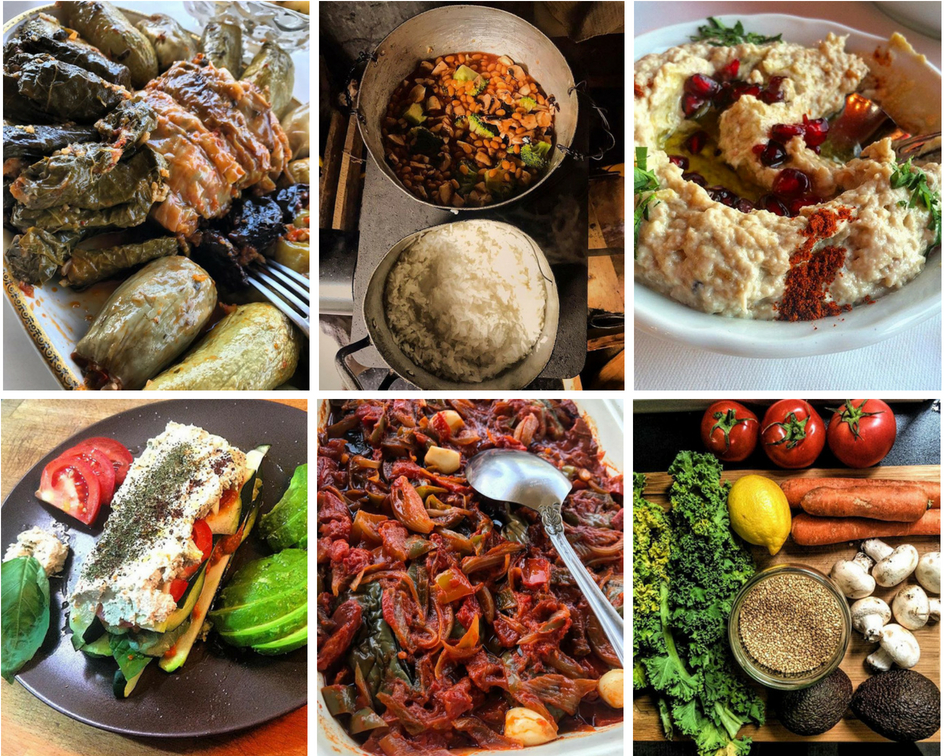 V: Do you have any stories from talking to people?

SA: I had a couple of really really great experiences. One of them was a farmer on Ireland, and he and his partner were talking to me. I asked:

I have another story also about a Dutch guy who was watching the footage in Barcelona. We were talking about if it is possible to kill any animal humanely, and are there any happy animals in the slaughterhouses. 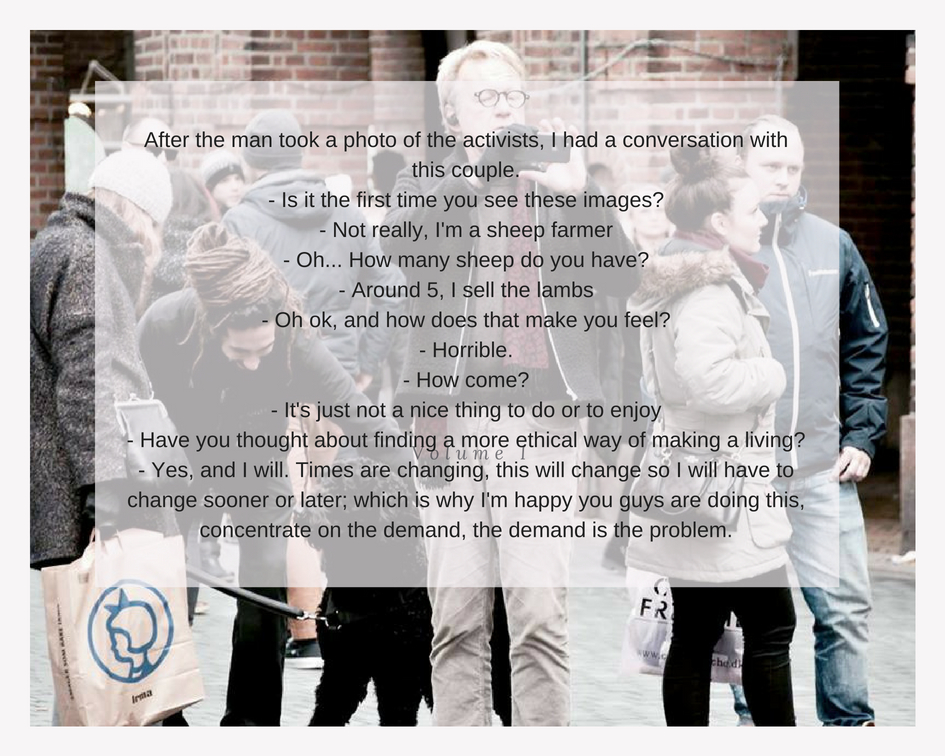 V: What strategy do you suggest when someone join to AV?

SA: They can stand in the cube, talk to the people, or they can do both. No one is obligated to talk to the public. Someone who is not comfortable with it, can’t force themselves to do it. The best way of approaching people on the event is when you see people watching the footage, to ask an open question, like: “How does it make you feel?” instead of “Does it make you feel bad?”. This way they can talk about how this make them feel. As long you are asking people questions and make the other people talk, basically you will see what it is exactly that stops that person from going vegan. You can educate them on that part and hopefully they go vegan. 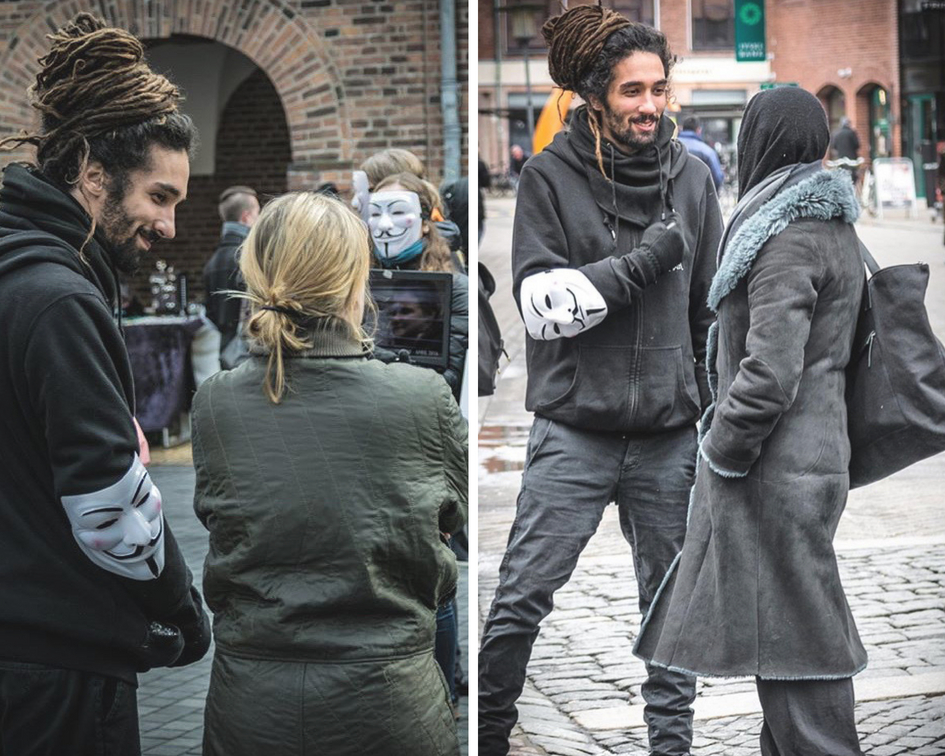 V: When someone attends an AV as an activist how she / he should prepare mentally and emotionally? What state of mind he or she should be in when attends?

SA: Be excited about it, as you are about to meet a lots of interesting people. It is a family kind of feeling, a good community. Be excited, be positive, make sure to stay calm if anytime a conversation gets aggressive, just say: “Thank you very much for your time”, and move forward to the next person. Sometimes inside I am not that calm, but I know staying calm is more effective. Even when I have the right to get angry, me going angry, is not going to make that person going vegan. So I just stay calm instead.

V: What is the message you would like to give to people?

SA: I would say, that keep in mind that every single second we are killing 85.000 animals. People usually say 2000, but it is because they only count land animals. These animals did nothing to us and it is completely unnecessary. Destroying our health and destroying our environment, and we are killing all these innocent beings for nothing but money and convenience. If you were in their place, what would you want from people outside, to help you get free. Try to be that person. You would have wanted it if you were in their place. This is what activism is about.

You can read other interviews here:

With Jo Frederiks, about art and veganism

With Ullenka about how she cured the eczema of her daughter with raw vegan diet.

Dr Ruth Heidrich: A 36-year vegan survivor of Stage 4 breast cancer, and the first vegan to do the Ironman Triathlon. At the age of 83 she is still in perfect health and living an active life. She was also featured in the Forks over knives documentary.

With Marlena Roznberg about sailing, veganism and following your dreams.

With Richard Watts, about Vegan SideKick, motivation, trolls and excuses.

With Mariia Goldscmidt from Tofu family, about being a fit mum and raising a vegan child.

We have created the biggest list of vegan related books if you need more information about veganism, looking for mouth-watering recipes, tips for raising vegan kids or children books for the lil ones.

If you are new to veganism, you might find this article useful: Vegan Starter Kit.